Moving from Connecticut to Florida (The Ultimate Guide)

Relocating from Connecticut to Florida? Thinking about a move from CT to FL? Florida has long been a popular landing spot for snowbirds and tourists alike, but it is also becoming a popular destination for full-time homeowners.

There are many reasons why people flock to the Sunshine State each year, and it’s not just because of the frigid Connecticut winters we all know and love. If you are planning to move southward, here are some of the things you can expect to see.

Pros and Cons of Moving to Florida

Moving to Florida has many benefits, and possibly a few deterrents. Let’s examine the pros and cons of relocating to FL.

Florida has a general sales tax of 6%, but depending on the city and county this can go up to 8%. Most intriguing though, there is zero state income tax in FL.

The entire state of Florida is known for having extraordinary winter weather. In fact, it has the mildest winters in the Continental United States. Even in one of the state’s northernmost cities, Fernandina Beach, winter lows will rarely get as cold as 48 degrees (the January low). Meanwhile, southernmost Key West experiences January lows in the mid 60’s.

Warm year-round temperatures make Florida the ideal spot for boating, fishing, surfing, or just lounging on the sand. There are more than 3,000 lakes across the state of varying sizes, including the fourth largest lake in the U.S., Lake Okeechobee.

FL wildlife is a sight to behold. For those moving down from Connecticut, prepare yourself for a whole new way of living in “The Alligator State.”

Cost of Living in Florida

Let’s use the example of the cost of living in Orlando, FL versus Hartford, CT. Orlando’s rent prices are 9.65% higher than Hartford’s, but the local purchasing power is a whopping 48.96% higher in Orlando. This means that grocery prices, restaurants, and a few other living expenses are significantly lower in Orlando than in Hartford.

If you are relocating to Florida with the same salary as you had in Connecticut, your overall cost of living would be anywhere from 10-20% lower. This would also vary depending on whether you are renting or owning a home.

Average Cost of Utilities in Florida

Best Cities to Live in Florida

Maybe you’ve decided to relocate to Florida but you haven’t chosen a city yet? Here are some of the top places to call home in the Sunshine State. Tallahassee is located in the northern portion of the state, and is Florida’s state capital. This panhandle city is a fantastic place for families and young professionals alike, thanks to below average housing prices, excellent K-12 schools, and the nationally recognized Florida State University (named the top four-year graduation rate in Florida).

The city sits just 24 miles from the light blue waters of the Gulf of Mexico, making it a great spot for easy weekend getaways.

Jacksonville is the most populous city in Florida, as well as the largest city by area in the Continental U.S. Despite its large geographical footprint, Jacksonville has a quiet feel for a big city. It’s a stone’s throw away from Georgia, and 2-3 hour drive north from Orlando.

There are plenty of fun activities here, especially when you venture over to the Atlantic Ocean. Several of Florida’s top beaches are within an hour of Jacksonville, including Daytona Beach and its famous Daytona International Speedway.

Orlando is a major hub for tourism, but also has a burgeoning tech industry and an opportunity-rich healthcare sector. If you decide to move here, you’ll have the option of living near the bustling city center or opting for a quieter spot in the suburbs. Some of the most popular suburbs around Orlando include Winter Park, Hunter’s Creek, and Oviedo.

There are endless activities and places to go throughout Orlando, including The Florida Mall (the largest mall in Orlando) and the popular Orlando Fashion Square.

The Tampa Bay area encompasses three cities, Tampa, St. Petersburg, and Clearwater. All are fantastic places to call home. Tampa has above average schools, is close to the beaches, and has a growing bar and restaurant scene around the city center.

There are plenty of live sports in the area, with the Tampa Bay Buccaneers, Lightning, and Rays’ professional sports teams. Boating is another popular hobby with nearby Siesta and Longboat Keys. All in all, Tampa’s a great city to live for families and retirees.

Not to be confused with its affluent neighbor, Palm Beach, West Palm Beach is a desirable landing spot for fans of South Florida who don’t like the hustle and bustle of Miami or Fort Lauderdale.

The Meyer Amphitheater is an exciting outdoor waterfront theater that was made out of an abandoned Holiday Inn. Or you can choose from dozens of world-class golf courses. The temperatures rarely drop below 60 degrees, even in winter.

Sarasota is just a few miles outside of Tampa, making for an easy commute for professionals in the area. When the weekend comes around you can enjoy the bevy of parks and outdoor spaces throughout the area, including the Myakka River State Park.

Just a few minutes north of Miami, Fort Lauderdale is a great reprieve from the South Beach energy. It’s a good place to live for families with some of the highest-ranked schools in the state. You can head to the ocean anytime to try some paddleboarding or diving or venture out to one of 40 world-class golf courses in the area.

There are tons of great bars and restaurants along the Riverwalk serving the best seafood in South Florida, and many historic lighthouses to go explore afterwards. Miami is a fun, upbeat city full of energy and vibrance. It’s the place to be if you’re young and looking for an exuberant atmosphere. The Hispanic community is thriving in Miami, contributing to a vibrant overall cultural scene.

The city sits right on Biscayne Bay and is probably most famous for its one particular beach, South Beach. There is always something going on in Miami so if you’re looking for a place with nonstop action, this is your home.

Key West’s official motto is “One Human Family.” The beautiful island city that forms the southernmost point in the contiguous United States is like a vacation that never ends for its residents.

Unfortunately for others, Key West is simply too expensive to make living there a reality. Since it’s located on an island, supplies have to be brought in from the mainland. Grocery prices, gasoline, and other living expenses are significantly higher than the rest of Florida.

The northern parts of Florida are classified as humid subtropical. As you head south, the climate becomes less subtropical and more tropical.

Summers are very hot and humid with lots of rainfall throughout the state. Highs in July and August can reach the high 80’s and low 90’s Fahrenheit. Thankfully, winters are mild in most places. South Florida sees highs in the low 70’s in January, with lows rarely dipping below 60 degrees. The northern part of the state can get a little cooler in winter but it’s still far warmer than the rest of the U.S. 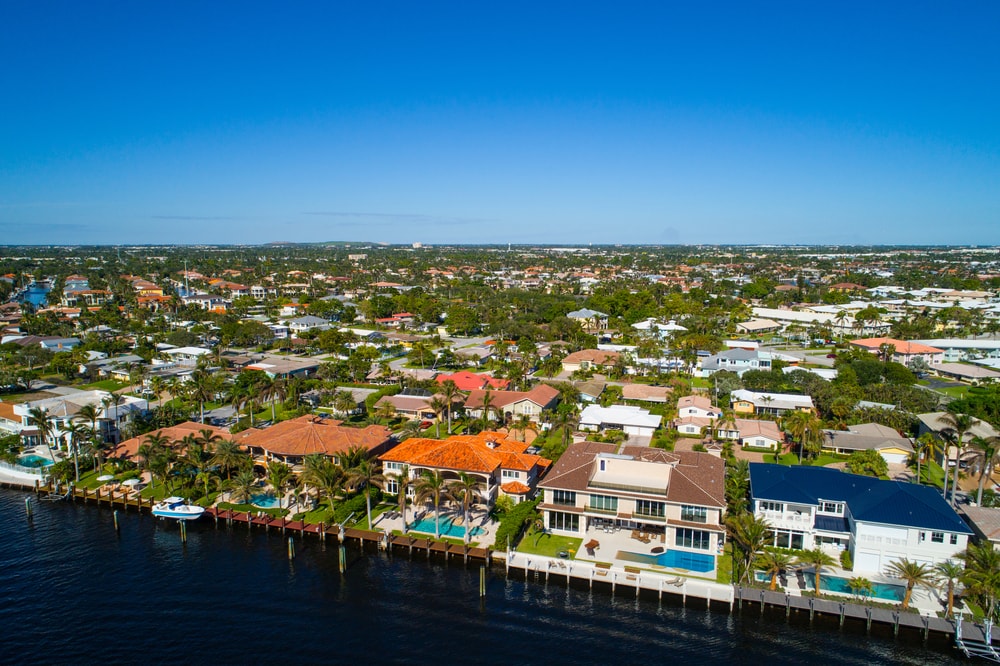 What is the average cost to live in Florida?

Florida’s median home price hovers around $330,000, while the median monthly rent for a two-bedroom apartment is $1,200.

Parts of central Florida, as well as on the panhandle, tend to be cheaper. The median home price in Pensacola is among the lowest in the state, at $165,700.

What are the requirements to buy a house in Florida?

The path to homeownership is similar in other states. You’ll need to have a credit check performed and have a FICO score that is 620 or greater. The higher your score, the better chance you’ll have of receiving a great mortgage.

What is the most affordable place to live in FL?

Of the larger towns and cities in Florida, the most affordable places to live are Kissimmee and Cape Coral. Each offers a different taste of Florida life, with Kissimmee being near Disney World and other Orlando area activities, and Cape Coral is located along the Gulf of Mexico.

Cape Coral offers residents some of the most affordable coastline properties in the state. The average home value is $214,700 which is less than other popular beach communities like West Palm Beach or Sarasota.

How to Move from CT to FL?

When planning your relocation from Connecticut to the Sunshine State, consider the importance of hiring experienced movers. From packing to storage needs, you need a professional moving company that understands what it takes to make your move go as smoothly as possible.

How much will it cost to move from Connecticut to Florida? There are many factors that will dictate your overall price, especially the distance of your move. If you’re moving to Northern Florida, like Tallahassee, Jacksonville, or Pensacola, it will cost less than moving the extra 350 miles south to Miami.

How Long Would It Take to Drive from Connecticut to Florida?

When planning your trip from CT to FL, plan for it to take a minimum of two days to complete the drive. If you’re heading to central Florida or south, it’ll take anywhere from 18-20 hours of driving. If you’re going to the northern part of the state it will take closer to 15 hours.

Either way, you’d better plan for 2-3 days of travel. Possibly more if you want to do some sightseeing.

What are the Best Times to Move to Florida?

If you want the absolute best weather for your move, the best months for driving from Connecticut to Florida and getting settled into your new residence are October, November, April, or May.